Question / Statement: I would like the French better if they were cleaner
Answer: It is absolutely understandable ….

Life, back in times when a twitter was still a succession of small tremulous chirps and politically correct was not binding.

This little pearl was found, amongst many others in what could be the ancestor of all the tourist guides published nowadays and without which many travellers would probably feel totally lost.   God forbid they immerge themselves in the culture of a foreign country without a guide made by someone like them for them!

In fact, the level of misunderstanding and prejudice was so strong in 1944-45, that the US Army deemed necessary to publish a Guidebook that was handed to every US soldier sent or already in France.
The guide consisted of 112 questions and answers," listing critiques and complaints most frequently heard by our soldiers in Europe".  Its main aim was to help the troops get a better understanding of "our Allies, the French".
Yes.

A lot has been said lately about the many incongruities of American foreign policy, or more accurately, American foreign policies.  The phenomenon is not very new and I wonder time and again why it keeps making the headlines.  Quite a few comparisons have been written lately, between the 'War on Terror', the Revolutions sweeping the MENA, Iran and the Cold War.
All the articles never failed to mention that the big difference between now and then was that then, the enemy the West was facing and defending its values against, the USSR,  was, at least, a rational actor, so unlike those crazy state and non-state terrorists …..
Hum hum … I don't mean to pry, but … leaders depicted as "neurotic" and "impervious to logic of reason", a government pervaded by "oriental secretiveness and conspiracy", a country qualified as a "malignant parasite" that should be studied as "doctors study unruly and unreasonable individuals" …  this, I believe, is how the 'enemy' was depicted by the US in those days.  These were the adjectives, carefully chosen by George Kennan in post in Moscow in 1949, that constituted not only the main igniter but also the main narrative during the best part of the fifty yearlong Cold War that engulfed the whole world and divided it in 2 camps: the rational and the irrational.  The West and the East.  The Good and the Bad.  The Cowboys and the Indians ...  No, sorry! So terribly sorry!  Not the Indians! Never mention the Indians, when dealing with American policies.

A couple of years before that, the Americans were as puzzled by the French as they were by the Russians as they seem to be by the Middle East today and by anyone who is not American actually. (Yes I am absolutely convinced that within that big country, the inter-state level of understanding must suffer many lacks too, but I will not dwell there.)

US' Daedalus did not start in the Middle East.  Now if the "Arabs" - for it seems to be an all-encompassing term in the US, without any distinction, be it geographical, political or religious - are irrational and god-crazy, the Russians were neurotic, the Indians never existed, except on TV, and never without John Wayne; the French do have a place of honour, for they got themselves a whole book of criticism.
They "stank", were "lazy", "corrupted", "communist" - so I guess also neurotics -, "immoral" and "morally rotten".  To sum it up, France was (probably still is very much so to most) a decadent nation!
Et voilà!  The world as seen through the US prism.

So next time you hear someone wonder about the US incongruities in foreign lands, and do not understand why "backward third-world god-crazy oil-rich countries" put up signs politely refusing "foreign intervention",
please keep in mind it is not "up, close and personal"... also think about the answer to statement #112 in the GI-Guide that France is a decadent nation, (looks like the author, was fed up by then and wanted to wrap it up as quickly as possible):
"How does one measure decadence? The Germans used to say that "democracies are decadent" ?! 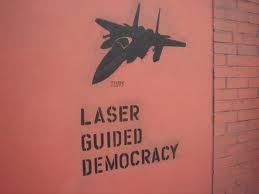 NB 1:
The Sub-Chapter on French morals is quite amusing.  …
Statements included in that chapter are about French and drinking, prostitutes, and of course, french women.  The latter are qualified as being "easy", immoral and … always "lifting their dress or skirt whenever sitting down" ... The answer given by the author to those pure, god-fearing, moral GI's that those wretched women are not trying to attract their attention and force them to ogle their knees (!!!)  but the act is done in order to preserve the women's clothes and delay as long as possible their being damaged by time, since their clothes are made of very bad quality.
The last statement is that the French are morally rotten, to which the author answers that their morality certainly differs from the American morality, but that it is quite difficult to define what is and is not moral and depends on one's angle.
In that book you will find lists of Frenchmen who have contributed to the world, their inventions, their ideas.  There are also quite a few comparisons between the French and the Germans.  Though, I must say, the latter being deemed of higher morals and work ethics than their liberated counterparts…
I wonder when the same will be clearly stated and so much efforts will be put in order for the West to have a better understanding and become more open-minded in regard to MENA countries...

NB 2:
Another reason this guide was apparently published is the high number of rapes committed by US soldiers on those "Immoral French Creatures" - in 44-45, 3,620 women were raped by American soldiers in France; in England the number is down to 2,420; while Germany holds the record with 11,040.  Maybe the soldiers should have been geared with dictionaries … No is Non, and Nein, and does not become Yes when the accent changes…
The question is also somewhat approached, although, the other way round:
Question: French troops terrorized women in Germany
Answer: As any other Army, the French Army has been faced with misconducts, thefts, rapes and other acts of violence committed by their soldiers against the enemy.  If you think the French have misbehaved in Germany, ask the Germans how they behaved in Poland, Russia, Greece and Holland.  (!!!)  And it goes on: I you were a French soldier whose mother, sister, girlfriend, wife, had been taken in a camp and maybe raped or killed, you too would experience problems controlling your emotions.  It does end by acknowledging the fact that a good number of French women have been "terrorized" by Americans.
Email Post