I've emerged from the defeat strongly believing in a set of principles.
Firstly, a total disavowal of autocracy and dictatorship.
Secondly, a disavowal of any resort to force or violence.
Thirdly, we have to rely on the principles of freedom, public opinion, and respect for our fellow human beings as values needed to foster and advance progress.  With them at our disposal it can be achieved.
Fourthly, we must learn to accept from Western civilisation the value of science and the scientific method, and without any argument.
Nothing else should be automatically accepted  without a full discussion of our current realities.
With that in mind, we should be prepared to get rid of all the fetters that tie us down, whether ancient or modern. 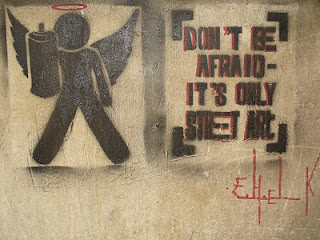 Two graffiti artists from the opposition grouping known as the April 6 Youth, Ahmad Maher and Amr Ali, were arrested for spray painting political slogans on Feb. 17. Maher said he and Ali were spray painting — in Giza, Dokki, Agouza and Imbaba — for two nights prior to their arrest.
These words were not the words uttered by Mubarak yesterday,  to a waiting world glued to its screens, TV's, Computer, Pads, Pods and BB's, and almost as impatient as the tens of thousands of protesters in the streets of Egypt that were denied access to any communication medium and were calling for the "Snake" to resign.
Neither were they proclaimed by the newly appointed Vice-President - appointed by said snake as "goodwill gesture" towards fighting, tired, brutalized, abused, hungry, disenchanted and sometimes dying, crowd of protesters  -  Omar Souleiman.
Yet, those are the very words the crowds are waiting to hear and are ready to give their lives for.  Those principles are the ones they yearn to hear and live by.  But no-one said them.
The revolution, for it now seems fair enough to call it that, although many still prefer the less violent term of 'protests', that came to live on screens, as any modern play should, seems to be lacking the one crucial element to make it perfect: a head!
Someone who would have rallied the people around those principles, principles by which he would have lived and abided himself, and in which he would believe intrinsically, which in turn would enable him to sell them as  "pre-paid package deals" .    That same person would have thought of including in the package some basic political program about how he would implement all those reforms, both economic and political.  Note that those  reforms truly are needed in Egypt.  (34% of the population in Egypt is under the age of 14, 50% is under the age of 25.  The World Bank estimates that in the next ten years around 100 million new jobs will have to be created if unemployment is not to rise from its already very high levels - officially 9.4%, unofficial estimates run it closer to 20%).
However, in today's reality, however much had such a person wanted to rally crowds around those principles, he would not have been able to go beyond the second, max 3rd pri    [Your tweet was over 140 characters. You'll have to be more clever. ]
... for you can only tweet 140 characters.  Clearly not enough to design and pass on full political programs.
Interestingly, all of these principles and ideas have been heard during the protests, but not from one man, not by the same people and never all together, leaving the place for … basically anyone trying to get into the Palace with the people's support, hence the fear of the West who for the most have no idea who else would be a possible candidate and who would serve their interests best.  The West talked a lot of Elbaradei and all the TV channels have already interviewed him at least once.  But that is merely because of his good syntax in English, not so much because he is supported and liked by the people - even though he would like  to be and has jumped on the occasion to fill in the gap.  The lack of knowledge of Arabic makes the situation even more unclear to Western journalists who not only have worry about relaying the messages in a dis-communicated world, but are also struggling to understand what is being said around them.  And I assure you that the majority of the Egyptians do not speak English and did not go to the same school Elbaradei went too.
So in the meantime, Mubarak, an army man, posted another army man as his Vice-President, another army man as his Prime Minister in charge of forming a new government and the rest of the army in the streets of the country … in order to defend the protesters who truly like and respect the army,  … unlike the police who are "thugs" like the "snake". 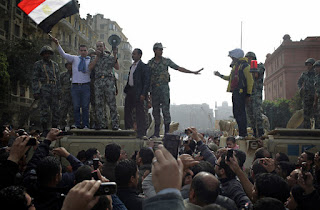 http://www.nytimes.com/interactive/2011/01/29/world/middleeast/30egypt-protest.html/?src=mtwt&twt=mnytimes
Mubarak will not stay in power, but with or without revolution, at his age and with his health, anyone could have predicted that too.   There is no doubt that eventually the gap will be filled.  Somebody will find himself propelled at the head of this revolution and will manage to "be more clever" and trespass the 140 characters' limit.  Will he manage to "get rid of all the fetters that tie us down, whether ancient or modern"?  How many lives will it take until that happens?
That remains to be seen.
At the time of writing, the streets were still crowded with people refusing to accept to replace "Mubarak by Mubarak" .
The words beautifully spoken at the beginning of the article came from  mouth of the villain in Naguib Mahfouz'  Karnak Café.
So there is the philosophy of Khalid Safwan*"
{*Safwan is the "bad cop", the torturer in the novel, who is endowed by a new sense of justice and whose world vision changes completely  by the end of the novel .   He ends up a new man, accepted by his peers , some of them survivors from his darker days when he seemed quite unable to greet another human being without a good mix of  water and electricity, in lieu of others' morning gin 'n tonic.  }
A.David
Email Post