Emily W. Schaeffer, an American-Israeli human rights lawyer and activist based in Tel-Aviv, recently wrote an article posted on http://theonlydemocracy.org/, a blog that questions the notion of Israel as “a democracy” in the Middle East, and puts a spotlight on the intensifying struggle for human rights, largely ignored by the mainstream media.
The article was given further publicity and shared on a number of social networks, among others, by Didi Remez, a senior partner at Ben Or Consulting.  Remez specializes in policy-change oriented strategic planning in the Israeli sphere and provides consulting services to a wide variety of organizations operating in Israel and the Occupied Territories.
Although Schaeffer raises a few interesting questions in her article "What if Bil'in held a demo and the army didn't show up?", there are also many flaws in it. The main one being its unfortunate lack of objectiveness,for it causes it to loose its power and effect and ends up sounding like just another one-sided piece of propaganda, the likes of which both sides excel in.
The article focuses mainly on the treatment of the "occupied" at the hands of the "immoral" soldiers and the harsh, and more often than not, unjustified, or disproportionate - to use an adjective in vogue these days and oft cited in the article - and brutal way in which they respond to the professed non-violent demonstrators.
The originality of the article lies in its basic and hypothetical question: "what would happen if the army did not show up at the demonstrations organized by Palestinians in protest of the Occupation, in the Territories", but then goes on to compare instances that are incomparable, such as demonstrations in western democracies and those in Occupied Territories; or that "kids, everywhere in the world, pick up stones and throw them"(... oh really, do they?).
Her first point, after citing the names and number of injured people during the protests, is about the illegality of the wall.  While I do not disagree with the horrible connotation it has, while I do not disagree with the abuses (mainly, land theft cases under the false pretense of national security), while I certainly do not disagree with the fact that it probably is neither the best nor a long-term solution to the problem, in the meantime it does serve some purposes.  It was not build just in order to steal land and annoy the Palestinians, but rather out of necessity (and lack of imagination and/or other means of defense) after the number of suicide bombers attacks in Israel became intolerable and started disrupting daily life, and it was discovered that a great majority of those future came from the West Bank.

Some call it "the Wall of Shame", others, the "Security Fence" - another one of the epithet battles in the same line as the 'Freedom Fighters" // "terrorists" one. I shall heretofore call it "the Wall".
Some figures: suicide attacks within Israel: 35 in 2001, 53 in 2002, and steadily decreased to '0' in 2009 (sources ISA).
The building of the Wall started in 2001.  Its officially stated purpose: to "provide security [...] a central component in Israel's response to the horrific wave of terrorism emanating from the West Bank, resulting in suicide bombers who enter into Israel with the sole intention of killing" (http://www.securityfence.mod.gov.il/Pages/ENG/purpose.htm).
The Wall is not a fixed barrier but a movable one.  (Yes, I know... Officially, Israel also meant to get rid of the Territories as soon as possible ....)  However, it has already been moved on a number of occasion, in the planning phase as well as after the actual building of it, following orders of the Supreme Court, when the cases were deemed right and serious enough.
This is not to say that the Wall is solely responsible for the cut in terror attacks and suicide bombers.   In addition to the Wall, there have been a few wars and operations in the area, i.e, the 2006 Lebanon War, the War in Gaza.  There are many other factors that helped reduce the numbers of attacks but it has served its purpose on many number of occasions and helped thwart and stop a significant number of potential attacks, however much one dislikes the idea. 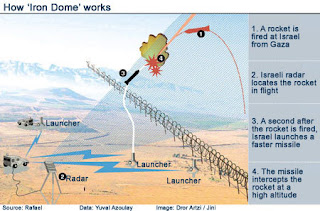 Funnily, according to Haaretz the Wall would have cost Israel its Iron Dome.
The Iron Dome is a mobile air defense system in development by Rafael Advanced Defense Systems designed to intercept short-range rockets and artillery shells. The system is supposed to act as a  defensive countermeasure to the rocket threat against Israel's civilian population on its northern and southern border and was expected to be operational by May 2010. Nevertheless the budget was allocated to the construction of the Wall instead.
Schaeffer further claims that, "Popular protest exists all over the world. Occupation is a scenario that logically leads to protest, and in fact under international law it is fully justified".  Again she misses her point here.  Yes popular protests exist all over the world, but are they all comparable?  Occupation does lead to protest, which leads to forceful response by the Occupying force.  International Law does not have a written Constitution.  It is made up of Agreements and Conventions that become binding if they pass the test of time.  Instead of maintaining the focus of the reader on the event she should describe and denounce, she proceeds to take umbrella under "International Law" without citing which law it is that she is talking about and thereby annulling the whole point, for, under International Law, it is also forbidden to blow yourself up in a mall full of people.  But that leads nowhere and does not help in cutting the circle.
Then comes the part about democracy.  Well, luckily or sadly, since Bil'in is situated in the territories it is not part of Israel, which in essence means two things:
1)It is not regulated by the same set of laws that legislate the State of Israel, and its inhabitants are not Israeli citizens.
2)The legal system empowered in the Occupied Territories is one that Israel has inherited (and applied with lots of gusto, true) from the Brits, the Administrative Rules. And yes, under Administrative rules/Martial Law, demonstrating is verboten!
So, where does that leave Democracy?   Democracy, another one of those magical words nowadays. One that automatically makes one feel enlightened and superior. A term used ad nauseam, in this article and by whomever tries to admonish Israel about its conduct.
Whether or not one likes it, democracy is applied in Israel, ... and it is not applied in the Territories, for how could it be?  To occupy a territory is undemocratic by essence. It is an act of war.
As regards democracy in Israel, one might be tempted nowadays to call it a military democracy, … and if one is brave enough, one can even try adding to it the term "Jewish" and it does start reminding one of a minestrone, with all sorts of left-over chunks of meat and vegetables simmering happily together in one big casserole. Main difference, minestrone is always tasteful, Israeli democracy is not. But however untasty and hard to digest it might be, it does exist.

Another one of the claims that is misleading in the article is the claim that the IDF "needs to violently respond to the nonviolent resistance in order to attempt to contain it, in order to report back home (a few dozen km away) and to the world that Palestinians must be violently reproached".  It would not even be correct to say that they feed off each other and the IDF/Israel certainly does not need the extra bad publicity of being shown to the public worldwide shooting bullets, whether rubber or others, at a crowd of "peaceful" demonstrators.
On the other hand, Palestinians have understood a long time ago the importance of the media in their fight for independence and recognition of their right to a sovereign country. No reports, no injuries, no fatalities, no Army, would mean no media. What would then happen? Would the movement die a natural death out of sheer boredom, especially with summer round the corner and temperatures that will rise to such degrees that any man in his right mind would rather stay indoors than face the scorching sun without the slightest chance of anyone, anywhere in the world ever hearing about it.  Would the movement grow?  Or, would they resort to more violent means in order to be seen and heard at any cost?

So, what would happen if the army did not show up? Well, the sad answer is: NOTHING! Nothing at all would happen. Nobody would know that such a place as Bil'in even existed or that there was a problem.
Would the territories be graciously given back? No
Would the uprooting of the olive trees stop? No
Would the wall disappear? No
Would a Palestinian state be created? No.
No, no and no, so in a very sad way, the fact that the IDF does act in such a brutal way when faced with non-violent demonstrators is the only way the villagers' voices can be heard at all.
And there is a problem.  They have quite valid reasons to demonstrate and be angry.  The reasons are clearly explained on their very-well organized and multi-lingual website - http://www.bilin-village.org/ , and basically comes down to: Illegal occupation of territories, of course, but mainly theft of agricultural land and olive trees by Israel and the building of what they call "the Wall of Shame" which, they claim has cost the village 60% of its lands. Apparently a suit has been filed with the Supreme Court in Israel.

Unfortunately, the solution to Bil'in is just another part of a much broader problem, one that peoples of the two nations have been trying to solve, with more or less enthusiasm, for the past 60 years.If Emily and the likes could just stick to facts that are blatantly horrendous enough and keep to real statistics, maybe more their voices would have more power.
Yes, there are abuses, yes they should be denounced. Yes! all's not that clear in regard to lands "confiscated" for "security purposes" and compensated or not by the state. Yes! do tell us about that. Don't always accompany those claims by random unfounded and unfocused rantings that are so one-sided and biased, in the end it all ends up sounding like just another propaganda tool.
Maybe the day Human Rights Activists learn to more objectively depict abuses on both sides, maybe then the Israeli public will no longer shy of them, and maybe, just maybe, that may in turn trigger some changes in the situation.