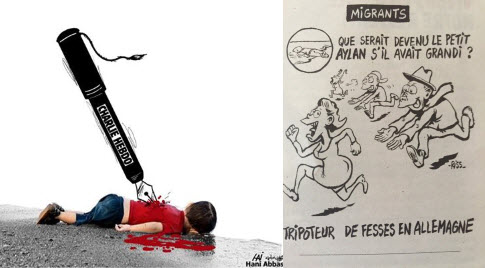 Everybody is banking on 3 year old Alan Kurdi 's death. The little boy drowned in the Mediterranean Sea last September as he was trying to reach European shores with his family. The family, of Kurdish origins, was on its way to Canada to join Alan's aunt, fleeing the horrors of Syria's bloody civil war.  While Alan has become a symbol of the West's failure to deal both with Syrian civil war and treatment of the refugees resulting from it, everybody - Crowned Heads and Heads of States, politicians and gamblers, artists and satirists - has tried to profit from his untimely death: new laws have been passed, legal obstacles to qualify as Asylum seekers have been removed, constituencies have been lost or  won, guiltless bombs have been thrown over Syria, by third parties, and last but not least, the art world has been inundated by depictions and actions of the tragedy.
The most shocking is Riss' cartoon, depicting Alan as a future rapist, as a direct reference to the mass rape rave that happened in Germany on New Year's Eve where the assailants were identified as migrants. Doubt has been cast on the identity and motive of the rapists. There have been suggestions that the rapes were orchestrated and manipulated from above, in order to overrule Germany's Open Door to refugees policy.
Riss' cartoon came out at a rather inopportune moment, on the first commemoration day of the attack on Charlie Hebdo which claimed the lives of 17 people, amongst whom the publication's cartoonists Charb(onnier), Cabu, Wolinsky, Tignous et Honoré. While France was rightfully saddened, shocked and outraged by the attack, and supporters of the "Freedom of Expression" rallied, not only in France but across states and boundaries all with one common slogan of "Je suis Charlie" which was seen and heard on schoolbags, on social media sites, on car bumper stickers, and straight from the mouth of various politicians and artists alike, the reality of who Charlie is and was is sadly exemplified by Riss' latest cartoon of Alan.
Would those politicians who paraded arm in arm (ironically some of them, notorious arm dealers themselves) dare do it again today?
Truth is, Charlie was on the verge of bankruptcy prior to the attack. The tragic events gave it a new lease.  The big majority of those who became instantaneous overnight Charlie supporters, shouting their lungs out for freedom in the streets and on social media, changing their profile pictures, holding public discourses that made the First Amendment look like a vulgar draft in comparison, had never even bought a copy of Charlie Hebdo. More than that, they probably never even liked it.
Which is why they are outraged today.
Which is why they feel betrayed: they don't know that Charlie Hebdo's line and politics have not changed.
It cannot change and will not change, for the raison d'être of the publication is to mock and to challenge.
Everything. Everyone.
Even a dead child if it permits them to point a finger and awaken some consciences, as some claim that was the idea behind the offensive cartoon.
The question remains, is it right to use a dead child that has become a symbol of all that is wrong with the handling of refugees to attain that goal? Aren't some subjects untouchable?

The offensive cartoon has been defied by cartoonists around the world with Twitter as their theatre of war. Here are some examples:

The strongest might be by Hani Abbas, a Syrian-Palestinian cartoonist, now living in Switzerland after he was forced to flee Assad's Syria for a cartoon that did not find grace in the eye of the lion. He continues to denounce war's atrocities in cartoons from Switzerland. 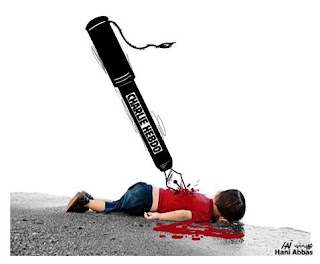 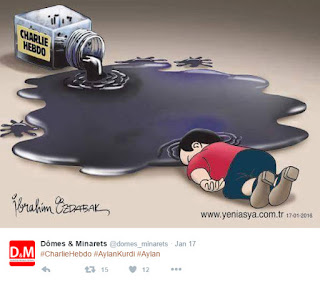 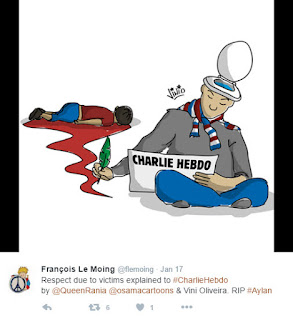 Here we see a grown up Alan pissing on Charlie Hebdo's tomb. 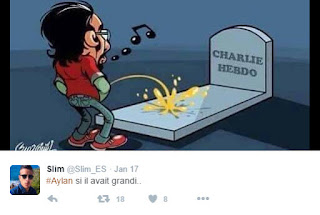 Finally, Queen Rania of Jordan commissioned Osama Hajjaj, a Jordanian cartoonist to show the finger in a more Royal manner. 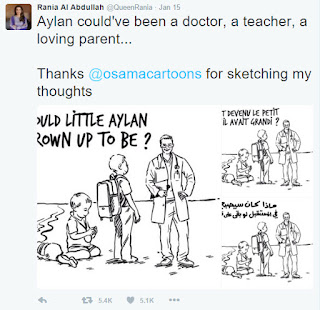 Both Queen Rania and King Abdullah were at the forefront of the defile held in Paris and attended by many heads of states in honour of Charlie's victims last January.