An interesting Exhibition is taking place in Lebanon:  The Vivienne Westwood Shoe Roadshow.
The exhibition is a retrospective of the designer's most iconic shoe designs and spans over five decades - highlights can be viewed on Vogue's page
[http://bit.ly/kdm1ME].
After the initial success of the show, last year in London, a world tour was planned and the shoes were set to travel to Moscow, Beijing, Hong Kong , Tokyo and Beyrouth.  Upon a closer look at the deliberate choice of the destinations, one would be entitled to wonder aloud whether or not, the British Designer, who brought the Punk and the New Wave fashion into the mainstream, is trying to further the notion of extending a hand to extending a … shoe.
The tour started in Moscow, where Kroushchev once ruled with an iron fist - which he never hesitated to bang on the table  in order to silence others - and made the shoe a symbol of the Cold War, when, in 1960 he lost his temper addressing the UN and banged not his fist, but his shoe on the table. 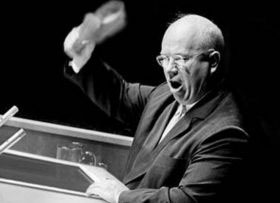 In February 2009, Chinese  Premier Wen Jiabao went on an official visit to the UK to discuss Economic Cooperation & Trade Relations between two countries, with then UK PM Gordon Brown.  As Jiabao was giving his lecture, in Cambridge, 27 year old Martin Jahnke, a German student, created a commotion by standing up  whistling and shouted "How can the university prostitute itself with this dictator here?" [Reuters http://reut.rs/lJUFJR] before hurling his shoe at the Visiting Head of state.
China is also notorious for its cruel foot binding practice that lasted about 1000 years.  Bound feet were considered erotic.  Perfectly lotus shaped feet ensured its owner a prestigious marriage.
Hong Kong, third on the list, is also the proud stage of a shoe incident that took place in march 2010 when Henry tang, Chief Secretary for Administration in Hong Kong, attended a Youth Summit and had a shoe thrown at him by an angry protester who had become unemployed after being fired by  a computer company and felt the government policies failed to help him.
Tokyo is to be the last station of the road show.  Apart from a rather funny  episode where the State of Japan sued Crocs in the years 2007-8, after more than a hundreds complaints where filed  following accidents  in which Crocs' wearers got their "shoes" stuck in escalators, there have been no other shoe incidents.
On a side note, it is interesting to mention that  "authors  of  Otogizōshi (14th-16th Century Japanese Prose narratives  or companion and  folk  tales) intended for  women  and  children deliberately eliminated the  shoe  which is  associated  with female sexual  symbolism"
But, back to Beyrouth, where the exhibition is currently being held: the second stage of the tour, the Middle East, the place that brought shoe throwing incidents to the front page of many newspapers and was the source of many copycats incidents after Bush Jr. was hurled a shoe at by Muntadhar al-zaidi during a press conference in Iraq.

More recently, one of the striking images of the Egyptian #Jan25 Revolution was when in February, protesters in Tahrir brandished their shoes at Mubarak as he was announcing he would not be stepping down from his position as President of Egypt but would hand over powers to his deputy.
Time Out Lebanon advertizes the exhibition mentioning the Shoe as a fetish object.  A debate has been stirred in the West,  between William A. Rossi, a podiatrist, who maintains that "the shoe is the erotic foot's pimp and procurer" (1) and Harold Koda, curator of the Metropolitan Museum of Art's Costume Institute, who thinks the opposite is true: "The shoe isn't the pimp for the foot. It's the other way around. The foot is the pimp for the shoe. It's the shoe that is the erotic object." (2) Was it Cinderella's glass slipper or  her foot that ignited the Prince's ardor?
In the Arab world shoes are considered dirty and showing the sole of one's shoe or throwing it at someone is probably the equivalent of  brandishing one's middle finger in the West, if not worst.
The exhibition is being held, rather befittingly,  in a historical palace on the outskirts of Beyrouth, The Sursock Palace.  Befittingly, for its multi-cultural history is as colourful and varied as the shoe models being exposed and the different interpretations and significances one gives to shoes.
Built in 1860 by Moussa Sursock, the Palace was one of the grandest town house.  Today it is the largest that has survived intact the different wars and conflicts fought in Lebanon.  The Sursock family, whose origins can be traced back to Constantinople have  over the course of the last century, blended East and West, just like their town of origin, through marriages -  with the daughter of an Italian Duke,  with an officer from the British army and lately with an American.
Could shoes become the bridge between nations? Or are we to remain divided over a pair of sandals?
The Life of Brian - The sandal episode
http://www.youtube.com/watch?v=uywIYQEHZLs
(1)&(2) from "Platform Shoes", Cathy Newman for the National Geographic -http://bit.ly/juHvbD
Email Post
Labels: beyrouth Bush china cinderella exhibition fetish hong kong iraq Otogizōshi politics shoe shoeing sursock palace vivienne westwood