Even though Bieber cannot seem to stop the 'krehzing*' about the brutality of fame in the Holy Land where 'he cannot even eat a falafel in front of the Western wall' without being savagely harassed by hordes of barbaric intrusive blood-sucking-tick-like paparazzi and fans ... give him another week or two and he'll realize it actually is only when he eats that paparazzis and fans and oh-so-many-would-be-mother-in-laws are actually ogling him in a country where the culture of food supersedes any other and where all and naught revolves around your plate.
However, the real star in Israel is and remains Obama.
First spotted in a very simple, chic,minimalistic and sophisticated black & white version in the very 'chesty-silicon-valley of sorts' - Herzliya Pituah: 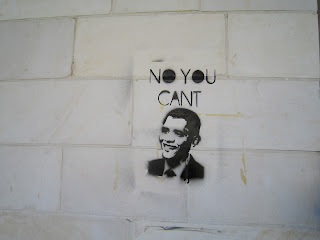 Then, seen in a more bobo, hip, cool yet colourful,  in and voguish but super-trendy and eco-friendly version in what used to be authentic Jaffa: 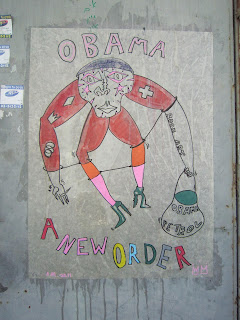 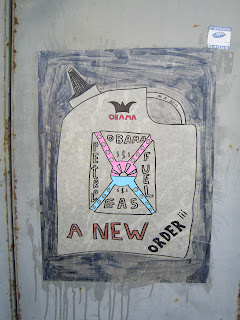 * to "Krehz": Yiddish for complain, cry, whine, moan, wail, whimper, deplore, lament, lament, lament ...  preferably all at the same time and for obsolete or no reason at all.