Preach … but don’t Pray!
After a year spent hearing lecturers, scholars and experts of all kinds, professional and would-be pros, military men, politicians talk about terrorism, if there is but one subject that is crystal clear and that all agree about, it is the following: prisons are the biggest breeding ground for terrorism!  Alleluia! A consensus! One at least.
While all those prestigious experts of terror may not yet be in unison about anything else, the one clean line in counter-terrorism is that extra care has to be taken with all those real, presumed and would-be terrorists in jails all around the world, for the best grounds for recruitment and radicalization are in those facilities we call prisons, detention centres, jails, penitentiaries, lock ups, … which, if one cares to stop and think about it for a moment, is quite logical, even to non-experts.  Angry youngster is incarcerated for a felony he has, and sometimes has not, committed (the latter makes the whole business all the more interesting, of course).  He is locked up with other thugs, who may be as angry as he is, but they know of some fantastic ways to help him channel his anger, and would be more than eager to help him, if he’d only join the club…. Yes, there are some minor requirements to join the club, such as giving up your soul, but hey, it is a minor detail, nothing really compared to all the benefits the new member will enjoy upon joining! And that’s it! Done deal! Had the guy been free, with family and surroundings and occupations, it might have been a little more complicated to get his attention and convince him, right? But ‘there’, he has no place to go, he’s easily reachable 24/7, and, let’s face it: bonds are made in joints, in real life too, not only on the big screen.
This is especially true for modern terrorists, who unlike their rather unglamorous ‘criminal offender’ counterparts, tend not to try to recruit anyone in jail.  The modern terrorist guarantee their future recruits a sense of belonging, self-importance and newly recovered pride, or finally discovered pride; a new family who cares and understands him better than his own and will stand up for him no matter what; finally they give him a sense to his life.  What more could a lost soul ask for?
Now, the world is not unaware of that, far from it and many countries are today trying to tackle the problem by establishing de-radicalization and re-habilitation programs in their detention centres.  The leaders in the field seems to be situated in the Far East, far far from Europe, not so far from our shores, yet so far in scope and means.  With Israel always at the forefront but, more correctly on the front page when it comes to terrorism and terrorist attacks – even though these have drastically receded in the last few years -, its experts in the matter being sent worldwide to lecture on the subject and train foreign forces, one would naturally tend to believe that they would by now have developed the best programs in their detention centers, wouldn’t one?
Well, rather unsurprisingly, and however much unfortunate it may be, it would appear that Israel is trailing far behind its Eastern counterparts in the subject.  What does in fact happen behind those closed walls?
Some background first: for once, Israel can actually almost pride itself in regard to its detention centres, insofar as it likes to compare itself with other Western countries.  Indeed, the number of detainees is about double the rate of that of Western European countries, slightly higher than that of southern Europe and the UK; it translates into roughly 0.15% of the national population in Israel, Western Europe averages 0.09% and the UK is 0.13%.  It is interesting to note that the US seems to beat all with a remarkable 0.75%,  higher than China, Russia and any other country where Human Rights are not part of the lingua franca!
Back to Israel, the population inside the prison reflects pretty well and is proportionately representative of the ethnic origin of the national population. Apologies to those who like to think that this or that ethnic origin is more intrinsically a criminal at heart, with one however one interesting exception, that of sexual offenders:  14% of the general population inside the prisons are held for such offenses, however, the number doubles amongst the Haredi inmates and reaches 30%.
As for the rest of the crimes committed, they are also percentage-wise in the same line as that of other western countries, i.e. 20% for drugs, 4% for life sentences, and 60 % for non-violent crimes.
Where Israel does differentiate itself in, however, is that on top of those 9000 inmates charged with Criminal offenses, it also holds another  … 12.000 on Security offenses.  According to experts in terrorism, these inmates are held in separate prisons where they “undergo a process of collective de-radicalization process”.  The challenges to such a process are according to a study written by a full range of experts worldwide that you can find here are the following:
·         Recognise changes in attitudes and beliefs among armed groups’ leaderships;
·         Open appropriate channels of communication through which collective de-radicalisation and disengagement efforts can be supported;
·         Provide the right mix of sanctions and inducements (the proverbial ‘carrots and sticks’) that will keep the process on track and move it towards a successful conclusion;
·         Enable the release and re-integration of terrorists and/or insurgents, ensuring that any return to violence remains unlikely.
The study further states that only Algeria and Egypt have seen actual disengagement and de-radicalisation process succeed and that Israel was “included in the sample to demonstrate some of the difficulties and obstacles in making collective disengagement […] happen”. 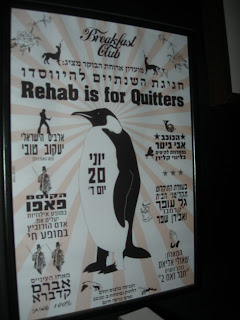 You may wonder why. I wonder why! The reason therefore is as simple as it is sad: the Israeli government is not facilitating any effort in the process.  These ‘securitary’ inmates are thus kept in different facilities than the criminal offenders.  The only thing the government does care about is to keep the different Palestinian factions separated in order to avoid inside the walls wars and “them killing each other”.  As for the walls themselves, they seem absent from the equation for there are no buildings but tents in which the inmates live. However, this last detail seems to be actually better than had there been any walls, according to a source that regularly gets to visit the said places.  None of the detention centers in Israel have air-conditioning and in the summer heat, it is by far better to be in a tent than in a crammed uncooled building.
Et voilà! That is as far as the de-radicalisation process goes in Israel!
Which truly is a pity, if one takes into account that even though not enough studies and reports have been done on the subject, so far, the success rate of de-rad processes are very encouraging in those countries that take the pain of facilitating them.  Think about what a difference it could bring to Israel were they only slightly more inclined to try an approach that has proved successful in quite a few places so far and seems to be the only viable and long-term solution to terrorism.
16/11/10 ~ Al.David
Email Post